Spider-Man for the PS4’s narrative is its greatest strength and easily its biggest surprise. Comic-book narratives can at times be overly complex and some are so convoluted that they can lose the reader while attempting to force its message across. This however, is not an issue in Spider-Man, it’s a coherent and cohesive effort with strong characters and emotional depth.  This is a story that needed to be told and Insomniac nails it.

Peter Parker has been Spider-Man for 8 years and is currently navigating life as a young adult. His struggles mirror a lot of ours; he can barely afford to live in his apartment and his love life at the beginning of the story is in disarray. This version of Peter is relatable, charming, and at the same time awkward. Balancing a professional and personal life is made even more challenging when you’re a superhero that the entire city tends to heavily rely on. He aspires to be like his mentors Martin Li and Otto Octavious but when their hidden lives and nefarious motives are uncovered, it takes a considerable toll on his subconscious.

Each of the main characters in Spider-Man project a central theme. For Peter, its self-doubt. As a young superhero, Peter is confident in his abilities as Spider-Man, but his dialogue and actions during cutscenes show that he doubts whether or not those actions are actually contributing to a positive outcome. While he is determined to defeat the Sinister Six, he constantly ponders whether or not Otto or Martin can be changed.  This internal struggle is central to his character. His confidence wavers with each encounter as he begins to see that both may be too far gone to help. In a quiet moment near the end of the game he asks Mary Jane “when is it time to give up someone?” This type of vulnerability was something completely unexpected but appreciated.  It makes extraordinary individuals feel more grounded as the average person would almost certainly feel the same way.

What adds to the key emotional moments in the game is when the perspective shifts from Peter to either Mary Jane or Miles. MJ is incredibly confident and brash, never questioning her actions as she believes that discovering the truth is for the greater good. Through her, you discover intimate details surrounding certain character motivations. Norman Osborne for example, is a character with outwardly selfish intentions but when playing as MJ, you slowly gain empathy for Norman as his actions are so that he can cultivate a cure for his sons debilitating condition.  Because of MJ’s friendship with Harry, it’s another emotional moment that practically comes out of nowhere and gives depth to both MJ and Norman.  Not every character is a villain because they want to be, sometimes extenuating circumstances can force the worst out of you.

With Miles, the player sees the eyes through a young man trying to find his way through tragedy. One of the first sections with Miles is when he begins frantically searches for his father after a terrorist attack and it is a heartbreaking experience. It throws you for a loop, because even though you can assume the worst, his determination to save his father is admirable and you root for him even though logically, you know that the outcome will not turn out in his favor. His reaction at the funeral displays a young individual who is well aware of his reality. Its grounded and hard-hitting, which makes you root for this character to succeed that much more. Miles overall growth throughout the plot is encouraging and his courage under fire will bring a smile to your face. All he really just needs to work on his fight banter and he should be good for the future.

What really helped the narrative of Spider-Man is that the twists are implied and expected but they never feel obvious. When Otto is introduced, everyone knew that he would eventually adopt the moniker of Dr. Octopus, but the earlier moments in this title make it feel as if he is a side character and that this transformation may occur in a future entry. The heavy emphasis on Martin Li and the Demons during the beginning of the story will bring your guard down, so it comes as a bit of a surprise when Otto finally snaps. When he is finally revealed to be the mastermind of the riot at the Raft, its expected but tragic because players had a front seat to the bond between Peter and Otto. There is so much emotional build-up that the final confrontation is truly tragic and gripping, you feel every punch and when it ends the last bit of dialogue held between Otto and Peter is fantastic. It’s especially poignant as Peter finally acknowledges that his former mentor can’t be saved. 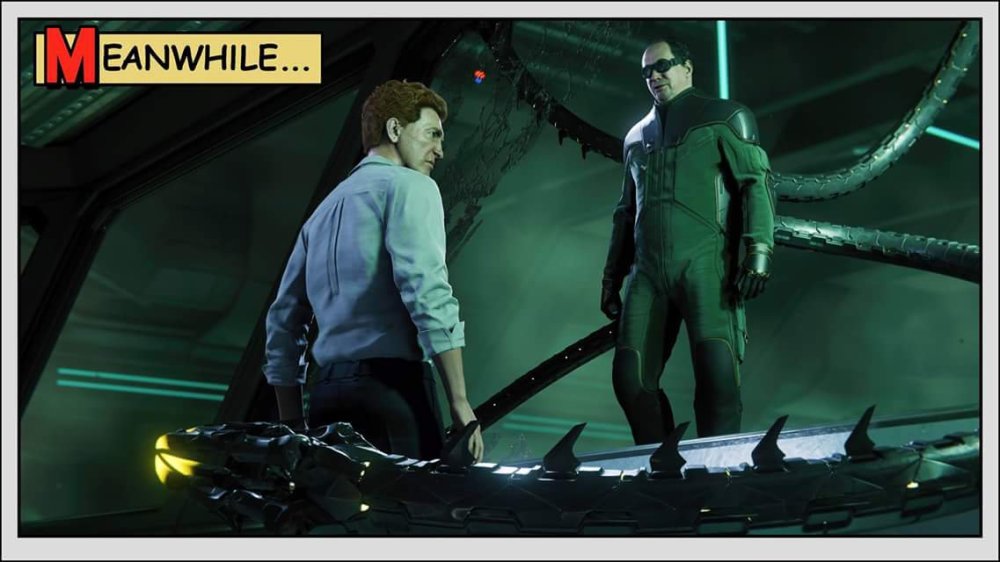 Like all comic-book films in this day and age, Spider-Man features post-credit cutscenes that hint at possible follow-ups. If the narrative is as powerful as the one found in this game, sign me up for the future series. To challenge for Game of the Year it requires a complete package. Gameplay, presentation, and narrative are all checked off by Spider-Man, with the narrative being the one question mark that was answered that could’ve held this title back. It’s safe to say that the narrative is as powerful as Spider-Man himself and this is a testament to the writers at Insomniac. This is great story and is an example for other adaptations to follow.