Originally released in 1998, Resident Evil 2 was a vast improvement on its predecessor; sharper visuals, (slightly) better voice acting, tense and thrilling action, all contributing to creating one the best games of the PS1 era. The remake? One of the best titles of the generation and the current gold standard for all remakes.

Normally, remakes or remasters include a visual upgrade and maybe a few tweaks to the controls to modernize the title. Thankfully, Capcom went all in with this remake and crafted a title that both respects and surpasses the original. No tank controls, fixed camera angles, or poor voice acting, this is a completely updated title intended to be enjoyed by both series fans and newcomers.

Leon and Claire return as the stars of the show and both have been significantly updated in their design that look far more practical than when they were introduced in the original. See Leon’s shoulder pads and Claire’s overall loutfit to see the difference. Completing their “A” Scenario will open up the other characters “B” scenario, which then depicts the story from their perspective. During the campaign, Leon and Clair will have a few interactions, which is disappointing, because it felt as these opportunities could have built rapport with one another.

Every character from the original returns and while many still have minimal screen time, their impact is far more substantial. The narrative as a whole is still relatively simple, survive and escape, but everything feels far more cohesive this time around. This is largely due to creating environments that logically connect with one another. It moves the narrative forward and keeps everything moving at a brisk pace.

Now, I can say that the proceedings are helped along with the introduction of Mr. X or the Tyrant, who relentlessly stalks you in the first half of the game. It practically turns the game on its head as you’re no longer able to casually explore areas as he tends to find you no matter where you are. Confronting the Tyrant is a waste of ammunition, the best method is to run and stay ahead of him. It can be irritating, especially when trying to solve puzzles, but his inclusion adds an extra layer of tension onto an already tense game.

Resident Evil 2 is a survival horror game, ammunition is scarce, enemies are bullet sponges, and if you don’t board up windows, certain areas will continuously spawn zombies. Even with modern controls and aiming mechanics, you’re always at a disadvantage as it takes multiple headshots to down anything. Enemies are also far more responsive to your movement, making running past them more difficult.

While you’re given a number of weapons to fight the horde with, the inclusion of grenades, flashbangs and combat knives as defensive weapons will allow you escape enemies unscathed as long as you activate the prompt in time. While grenades and flashbangs are disposable, the combat knife can be recovered if you happen to down that enemy. The knife is durable but overuse will result in it breaking, but don’t fret, you can find others by exploring.

Everyone will appreciate the updated enemy designs in Resident Evil 2. Zombies are terrifyingly grotesque, swaying unpredictably, making landing a headshot difficult to time. Lickers, which are blind, respond to strictly to sound, so if you run or discharge your weapon, it will alert them to your position where they will converge quickly. Nothing scarier than when they quickly lunge at you with their massive claws, which on the highest difficulty will result in your death. Zombie dogs are fast and agile and tend to circle around you before striking, they also have a tendency attack in packs ratcheting up the tension when you see them. All of the enemies have realistic damage modeling, meaning you’ll see the chunks being torn off as you continue to target a specific area. 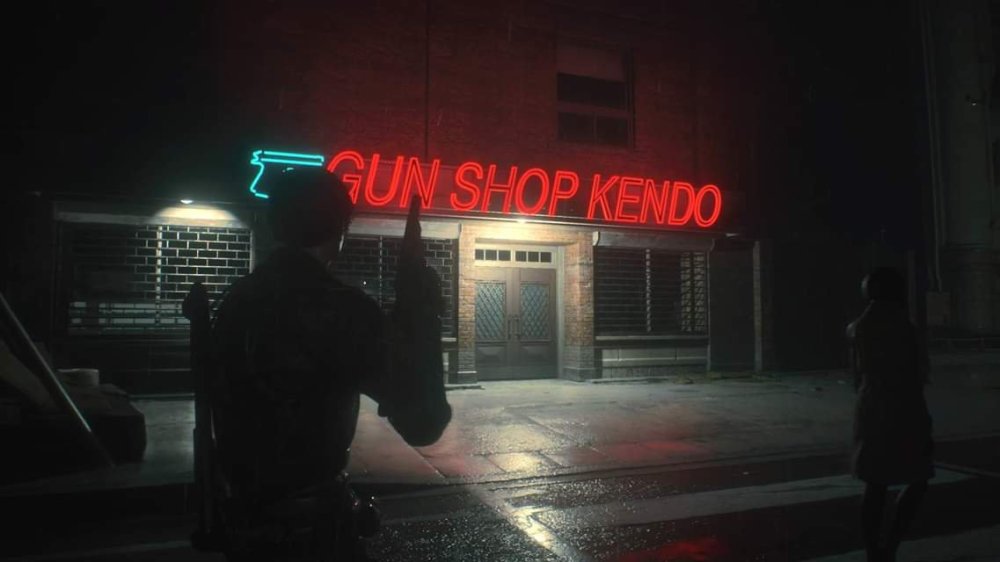 Boss fights are scarce, but when they do happen they are great, some will have environmental cues, while others are straight-up one on one fights. These encounters are challenging but never unfair, as long as you conserve your ammo. If not, be prepared to scavenge the arena and ensure that you hit every shot or you will meet a brutal end. What makes these fights memorable is that some of the arenas are small and confined and can be no larger than an office area. What makes things worse is that these bosses can cover a lot of ground in one attack.

If there was a flaw with the remake it might be with backtracking being such a prominent feature. As your inventory space is scarce, you will find yourself hustling to safe areas so that you can drop off items to save space. Puzzles tend to require a multitude of items to complete, so you’ll need the required space to store them. Certain areas require keys or tools to unlock them, so you will find yourself backtracking a lot during these segments. While you’ll able to create shortcuts to help you circumvent problematic areas, backtracking still occurs and even in such a great, this is still slightly frustrating.

It goes without saying that the overall production in this remake is tremendous. Every character model is beautifully detailed and the damage modeling is possibly the best in gaming. Environments for the most part will find you wandering dark with only a handful being well lit. Your character comes equipped with a flashlight and luckily, the lighting Resident Evil 2 is fantastic. If there was an issue visually it would be that some of the reflections on certain surfaces come off jagged and some zombie animations have a weird slowdown, in which they stutter when they rise up. It’s rare when it happens, but it is immediately noticeable and unintentionally hilarious.

It helps that the sound design is tremendous. Play this game with headphones as this one of the few titles in which the sound stays consistent even upon leaving an area. You’ll still hear the heavy footsteps of the Tyrant, zombies shuffling, and Lickers scraping across walls. Resident Evil 2 never allows you to get too comfortable, the sound design goes a long way in creating an atmosphere of tension and unease.

Obviously, survival horror games aren’t for everyone, this is a title that will frustrate players who prefer to fight rather than flee. But as a whole, theres a lot to unpack; 4 scenarios, a number of unlockables including new modes, weapons, and costumes, plus the added bonus of free DLC makes this a pretty complete package for a single-player title. This is a tremendous title and sets the standard for all future remakes to follow.

Capcom, I think we are all ready for Resident Evil 3.