Nothing new to the table, but fun nonetheless

Set around 20 years after the end of Far Cry 5, New Dawn drops you back into New Hope, Montana, but in a surprisingly beautiful post-apocalyptic landscape. New Dawn doesn’t break any new ground, it’s still Far Cry 5, but with a different color palette, new guns, and new antagonists. It’s a solid expansion, I don’t see it as a standalone game and neither should anyone for that matter, but for those looking for a wholly new experience will be disappointed. 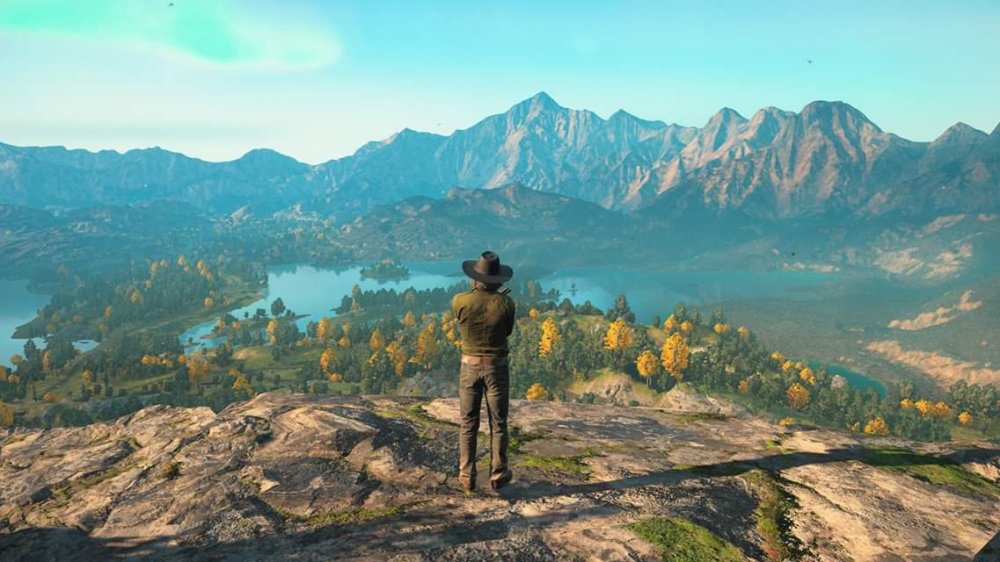 You’ll assume the role of the Captain, the second in command to Thomas Rush, a man who’s becoming renown for his humanitarian efforts. He is recruited by Carmina Rye, daughter of Nick and Kim Rye, side characters from Far Cry 5 who survived the apocalypse and help build the haven of Prosperity. While in transit, you’re assaulted by the Highwaymen, lawless rogues who take what they want by force and generally leave destruction in their wake.

They are led by the twins Mickey and Lou, who are both ruthless and cunning as they have no issue dispensing violence to whoever disagrees with them. These two are formidable antagonists, even if their motives are a bit straightforward and their actions predictable. To combat them, you’ll enlist the help of New Eden, which just happens to be led by Far Cry 5’s antagonist Joseph Seed. He’s just as charismatic this go around and isn’t as villainous, but he still plays a central role.

The primary objective of New Dawn is similar to Far Cry 5, take back New Hope and recruit as many allies as you can in the process. This time around theres less narrative freedom as you’ll be guided through the majority of the game. You will need to help Prosperity grow and to do so, you’ll have to take strongholds as they hold ethanol and this is used to upgrade your home base. 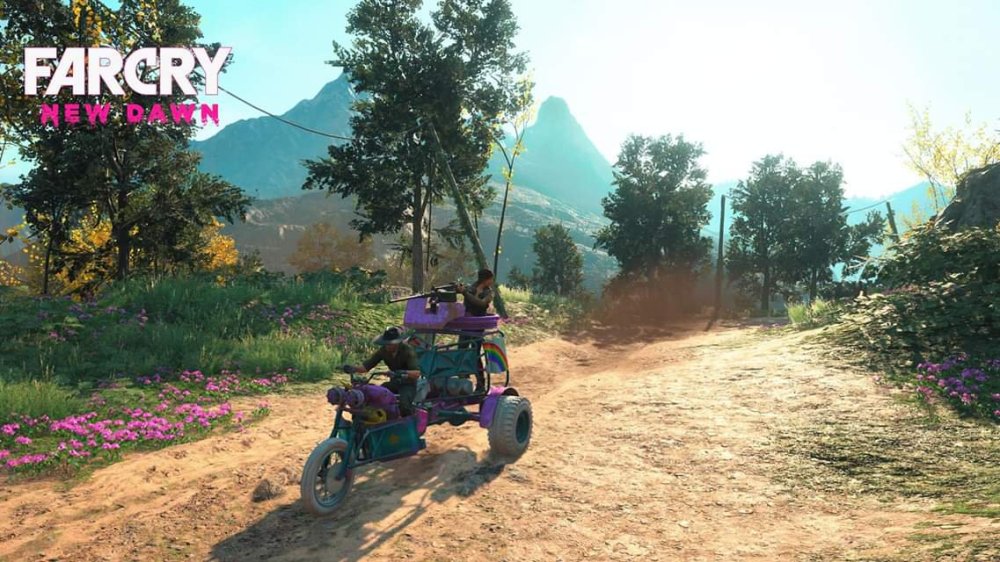 RPG mechanics are the biggest change to the Far Cry formula. Gear is now tiered and the higher the level, the more damage you will do. The perk system returns and you’ll have the freedom to upgrade based off your playstyle. Don’t get it twisted, Far Cry isn’t going full RPG, but the inclusion of tiers and a home base that can be upgraded is a nice touch. You can see the damage you’re doing to your enemies and this should motivate you to upgrade as soon as possible as enemies begin to move up in level.

Upgrading Prosperity will unlock new weapons, vehicles, maps, supplies, and will help strengthen your allies. It will also help you to fast travel to a location and take part in the all new expeditions, smaller levels in which you’ll grab loot and escape via helicopter. To fully upgrade Prosperity takes a lot of ethanol, you’ll have to replay strongholds on higher difficulties to acquire the largest amounts.

This is where the repetitive nature of New Dawn sets in. While the strongholds do get more challenging as the enemies go up in strength, they still aren’t that much of a challenge even on the highest difficulty. If you tackle these with a friend, you will breeze past them in a matter of minutes, whether you go in guns blazing or act stealthily. Redoing these strongholds are a requirement if you want the best gear, which is a drag as ethanol doesn’t come in high quantities elsewhere. 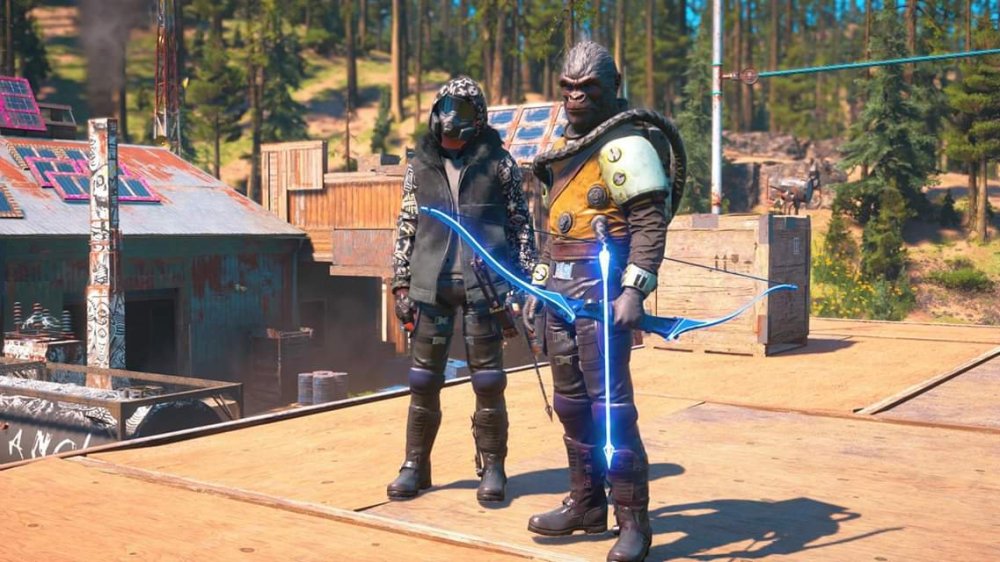 Luckily, the main and companion missions of New Dawn are fun and fairly diverse. The companion missions in particular, are really good because of the personalities of these individuals. Strangely, this is a far more positive game than Far Cry 5, even though it’s set in the post-apocalypse. Every character you meet however, seems pretty positive in a world that is chaotic and full of danger.

Speaking of danger, I mean that as at any point and time an animal or enemy convoy may come and interrupt your travel. Sometimes you’ll get unlucky and have to fight a legendary animal who’s been mutated and scarred by the nuclear fallout. These animals can dish out a ton of damage and will chase you long distances to ensure your demise. Killing them earns you their hide and that can also be used to craft special cosmetic gear.

As in all Far Cry titles, New Dawn is best played in co-op. Utilizing the new abilities in the game together can be a blast and the right teammate can make every encounter a memorable one. The light-hearted moments ten to come when playing with a buddy and they are more reliable than an AI counterpart. Some of them can be so aggro that they can injure you and themselves with their abilities.

New Dawn is a vibrant and visually appealing game. There are a number of beautiful vistas to explore and the overall design of the world is fantastic. The Highwaymen are bright and obnoxious with Neon colors which is a sharp contrast to the denizens of New Eden, who’s design is simple and prehistoric. This is easily the best looking in the series and features some of the best facial animation I’ve ever seen. The Twins have more than a few close-ups and it is jarring with how realistic they look in cutscenes.

Fans will enjoy Far Cry 5 will enjoy New Dawn as it provides answers for what was a questionable ending. The added RPG elements are a nice twist for the series even though they won’t change way you play. Mickey and Lou are interesting antagonists, but their behaviour is predictable and there isn’t much substance to them. Not every villain can be Vaas or Joseph Seed, but there was a lot of untapped potential with them.

There is just enough content to justify a 40 dollar price tag even with the repetitiveness of the strongholds. It might rub some people the wrong way that this wasn’t added DLC to Far Cry 5, but that doesn’t detract from how fun this title can be. New Dawn might end up taking the series into a new direction, one that elaborates on the RPG elements introduced in this expansion.

And that could make for a killer pairing.