It may have taken over 10 years for it to arrive, but Kingdom Hearts III has been worth the wait. While the narrative caters to longtime fans of the series, there is a memory archive that will get you caught up to speed or at least bring some type of cohesion to what can be a very convoluted tale. Beyond that, everything about the Kingdom Hearts formula has been refined, gameplay is buttery smooth and while you can still button mash, the more difficult encounters will require you to apply the various skills you’ll learn along the way.

Picking up a few years after Kingdom Hearts II, main protagonist Sora has lost all of his abilities and must attain the power of “waking” to put a stop to the plans of Master Xehanort, the longtime antagonist of the series. Along Sora’s journey, you’ll travel to a number of Disney/Pixar worlds, each with their own subplots, characters, and activities. Whether its Toy Story, Monsters Inc, or Pirates of the Caribbean, each world is well realized and incredibly detailed, with some of the worlds following the plot lines of their films almost perfectly. Tangled especially, is almost a recreation of the film, so if you haven’t seen the movie, Kingdom Hearts III has you covered.

When it comes to describing the gameplay, spectacle was the word that constantly came to mind. Combat is far more cinematic than previous entries due to the addition of attractions and the second/third forms that each weapon can take. When I say attractions, I specifically mean Disney attractions, as you’ll summon pirate ships, rollercoasters, and carousels to help do critical damage to all enemies. Every weapon in the game has a second form, with those found in later worlds having a third form. Once you get to that final form, you’re able to use that weapons finisher, which comes with a specific animation that does wide area damage and overall looks fantastic.

Summons have been replaced by Links, which are acquired by playing through the main campaign and these will summon certain Disney characters to deal heavy damage and potentially heal your party. Stitch for example, can you be used for wide area damage as his Link is used to trap enemies in areas that the player creates. Using these Links will take up your entire MP bar, but once the cooldown is complete, you will be to use them again. These are most effective during boss fights as using these properly can deplete their health bars fairly quickly. Simba’s Link is especially devastating as it utilizes the strongest fire magic in the game.

Boss Fights tend to be multi-layered and for whatever reason, really emphasizes gigantic enemies for you to fight. These tend to be hit or miss as their movement tends to be slow and you can telegraph their attacks pretty easily. It’s when you face the normal sized enemies, where the boss fights really shine. These bosses are fast, have multiple abilities, and are relentless when on the offensive. The last few fights in this game will challenge your defensive abilities as missing these opportunities will open you up for devastating damage. Regardless, these fights are thrilling and are a real highlight in a game full of them.

Beyond the combat, there are a number of mini-games that you can engage in ranging from cooking, classic games, and shooters that will each yield special items upon completion. You’ll also be able to synthesize items, which will help upgrade your Keyblades so that new abilities and buffs can be unlocked. The Gummi ship also returns and while you don’t have to upgrade the ship past level 2, traversing between worlds can be fun as there are bosses to fight and treasures to unlock. Combat in the Gummi ship is reminiscent of bullet-hell titles as waves of enemies flood the screen and you’re constantly bombarded with enemy fire. 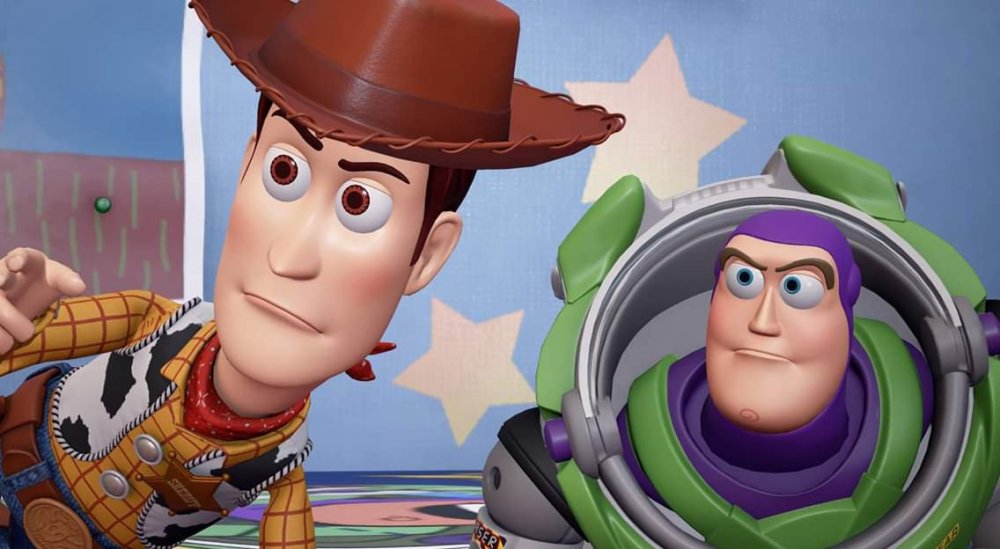 Accompanying the strong gameplay are the equally strong visuals. This is a looker, from the animations to the details of the characters that populate the world. There is always something happening on screen and all of it looks wonderful. Certain worlds have a distinct visual look to them and Kingdom Hearts III nails it. Toy Story and Monsters Inc are the definite standouts as Sora and company visually adjust to their settings. Plus, it’s pretty damn cool to see Woody, Buzz, and the Monsters Inc gang in a videogame witn high production values.

It’s an overall gorgeous game and there are moments that will distract you to the point of forgetting that the section you’re playing is interactive. I never seemed to mind taking damage during these sections, primarily because I was too busy wondering how all of this was happening with little no frame drops. This is a well optimized game. If there was a bit of a snag when it came to the productions, it comes in the form of its voice acting.

Every actor does a solid job, but it all sounds a bit melodramatic and can be off-putting in areas in which the narrative takes a serious turn. Sometimes it just doesn’t sound natural as there are pauses in dialogue where there shouldn’t be. These instances can normally be heard with the voice actors for original characters, while those who voice the Disney/Pixar characters are overall solid. While the conversations can be endearing at times, some can come off as hokey and cheesy, which may of may not force you to skip cutscenes.

Kingdom Hearts III overall is all about hope, which seems like a far cry from all of the grim and realistic titles that have become the standard in today’s gaming climate. There is never a point and time where you won’t hear a character talk about heart or hope, as friendship at its core is what Kingdom Hearts is all about. Yes, it can be a bit too sweet at times, especially during its grimmest moments, but it’s never overbearing and always feels necessary to the plot. Sora is a goofball, as is Donald and Goofy, but they are direct representatives of the series. While it can be convoluted and cluttered, look to Sora and the gang for it to make sense of it all through their adventures.

A decade of rumors and development should lead to a number of plot holes and gameplay issues but surprisingly, Kingdom Hearts III doesn’t have many flaws. The only real issues I had was with the games difficulty, distances between saves, and the narrative. I was underleveled for every boss fight, but never had to restart once due to how easy some of the encounters were. Save points can be sparse as you can sometimes go an hour between saving. This can be particularly stressful near the end of the game. While personally I didn’t have issues with narrative as I’ve played most titles, this is a game tailored for longtime fans due to the sheer number of characters and subplots.

Even with these flaws, it does not deter from the overall enjoyment that can be found while playing Kingdom Hearts III. This game can take 20 to 30 hours depending on how you play and this of course can be lengthened with all of the minigames and secrets littered throughout the various worlds. It is rare for a title to arrive a decade after the last entry and immediately be considered the best entry in the series, but that’s exactly what Kingdom Hearts III accomplishes. This is a satisfying conclusion to a saga that started way in 2002 and one that everyone can enjoy.