This is a far more mature Final Fantasy than a lot of the main entries.  The kingdom of Ivalice is in constant conflict, there is class warfare, occult magic, betrayals, and violence.  Characters that join your party are motivated to change the current state of Ivalice but are world weary.  It’s a vastly different tone from the hopeful nature of most Final Fantasy games.   Every character, even the main protagonist Ramza, will make questionable decisions in the name of their beliefs.  You will see your fair number of hopeful situations become dire and it really feels as if the entire Kingdom of Ivalice is doomed to remain in perpetual state of conflict. 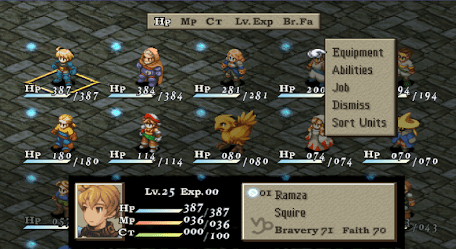 Gameplay in Final Fantasy Tactics revolves around a job system in which the player levels up a class to unlock new abilities.  If the player levels up multiple jobs this will eventually unlock new ones and those can be fairly overpowered.  For example, the moment you get the Ninja class with its expansive movement and damage output, you will literally dominate the battlefield.  All battle are turn-based and take place on an isometric field.  Players have to be cognizant of the wide effects of each action as there is the possibility of damaging your own party.  This is especially true with the Summoning class, as those tend to cover an incredibly large area.  When I first started out, I was just excited to get the Summoner only to be disappointed because of the damage I could inflict on my party.

If a character does happen to pass out, you have a definite amount of turns to revive them or they will perish.  Once a character dies, they are gone completely, so it’s always handy to have a phoenix down.  The same goes for enemies, once they get downed, they can be revived by their teammates.  If they don’t, then a crystal appears that can be absorbed by the player and that character is able to gain new abilities.  Later in the game this is especially important, as some enemies will have powerful abilities that you’ll want to absorb.

Special characters in Final Fantasy Tactics will make you forget about the normal characters that you can recruit.  Leveling up these characters can give the player an advantage in all battles as their damage output tends to be much higher.  Final Fantasy fixture Cid makes an appearance as a holy swordsman who once recruited, will never leave your party.  His attacks do considerable damage to enemies and he practically has zero weaknesses.  These special characters still required time to develop, but that time invested always yielded positive results.

When you weren’t engaged in combat in Final Fantasy Tactics, you were exploring the various towns and performing jobs using certain members in your party.  These characters would discover new locations, new items, and it generally was a great way to level up party members.  Listening to rumors is important as it could lead to meeting valuable party members.  Special characters are generally found through these interactions.  Some of these characters that are recruited can be monsters or characters from other games in the Final Fantasy universe.  Final Fantasy Tactics was an incredibly deep game in which the player could lose themselves in trying to maximize all jobs.  Even though the special characters would eventually replace the normal characters you can recruit, those normal characters still served a purpose.

Final Fantasy Tactics was given an excellent re-release on the PSP titled “The War of the Lions”.  It featured cutscenes, new job classes, and multiplayer support.  It was an upgrade to the original release and if you can find it, I highly recommend picking it up.  Hopefully they bring this port to the PC or the Playstation store.  While there are other games in the Final Fantasy franchise that players are familiar with, Final Fantasy Tactics should be fondly remembered as one of the best in the series.  The narrative is worth the price of admission, it’s a darker, grimmer take in a world that doesn’t look to have much hope.  I’m not asking for a remake, I’m just asking for a re-release to other platforms so that it can reach a broader audience.