During the 90’s, Sony’s Playstation was the preferred console for RPG’s. Final Fantasy, Vagrant Story, Legend of Dragoon, Suikoden, Breath of Fire, and the Tales series were all quality titles that are still fondly remembered today. Because the RPG genre was saturated with quality titles and it was common for certain games to fall by the wayside. One such title was Vandal Hearts.

The 90’s were also a time in which publisher Konami was known for developing quality titles, with Metal Gear Solid and Castlevania Symphony of the Night being the two titles one could immediately identify. Suikoden was their RPG series that while not immediately popular, spawned a series of titles that now has a cult following. Vandal Hearts represented another attempt by Konami to craft an RPG experience that could help stay relevant in a genre dominated by SquareSoft. It was a turn-based RPG that featured seven character classes and these classes would branch off into different classes after reaching a certain level. It was simple combat design in which you would use the strengths of a class against the weaknesses of the enemy class. If you think it sounds a lot like Final Fantasy Tactics, then you’d be right, but the real difference is that players were not given a choice in regards to troop deployment, which would lead to some pretty intense encounters.

Vandal Hearts had no bones about throwing you into the thick of things from the jump. Grinding wasn’t an option as once a level was complete, the game proceeded to push you forward. Every character in your party needed to be involved as that was their only means of leveling. Advancing to the next class was crucial to be successful. So while the main character Ash would always see the most action because he was front and center in most ambushes, having a balanced party was a key to success. Objectives in encounters would vary from defeating all enemies to reaching a certain area, regardless though, Ash would have to survive. So, whenever you were giving the option to have him fall back into a more defensible position, it was recommended. 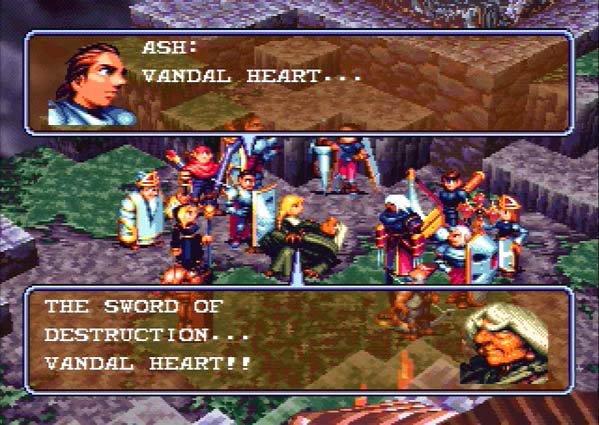 One of the things I loved about Vandal Hearts was its replayability. Enemy placement wouldn’t change and switching up character classes could make certain encounters a lot easier. There was a hidden character class that only Ash could attain and once you did, the game was pacified to the point where every encounter was laughable. The Vandalier class was fairly difficult to acquire but well worth the trouble. Ash could counter almost every attack in the game and it was usually a one-hit kill. It was a nice change of pace as instead of you back constantly against the wall, you were crushing enemies with one character. I loved it.

By today’s standards Vandal Hearts is a simple game that is easily forgotten as the superior Final Fantasy Tactics released a year after. I did however, enjoyed its bloody gameplay and mature storytelling even if the game can be a bit unfair when it came to encounters. I’ve never been a fan of an instant game-over due to the main characters dying, but this could be overlooked if you used sound strategy and didn’t just run in guns blazing. Its narrative was simple as almost all RPG’s of the 90’s were with your main character being the one to help stop an ancient evil. Vandal Hearts had the unfortunate fate of being released in an era in which Final Fantasy was starting to dominate.

Surprisingly, Vandal Hearts did receive a sequel and while the turn-based strategy had a unique twist that had enemies move at the same times as players, it was not a title that I would recommend. It didn’t have the charm of the original and encounters would feel clunky at times. There was a prequel in the form of Vandal Hearts: Flames of Judgement released for the Xbox 360 and PS3 and it was mediocre at best. The traditional combat was fun and reminding you of the first Vandal Hearts but it was a really ugly title. Like Legend of Dragoon and Vagrant Story, Vandal Hearts was simply a good title that stood no real chance because of the strength of its competitors. If you can find the title, give it a shot, it won’t wow you by any means, but it is still a lot of fun.