With all due respect to Greg Popovich, Mike D’antoni, Eric Spoelstra and Brett Brown, the Coach of the year should come down to either Brad Stevens or Dwane Casey.  It’s not that those other coaches don’t have a case, they do, but what Stevens and Casey have done with their respective squads is nothing short of impressive.

Boston shouldn’t be anywhere near the top of the Eastern Conference standings.  No Gordon Hayward, four returning players from last year, and a heavy dose of first and second year players.  Oh, and to pile on top of that, defensive stalwart Marcus Smart is hurt and so is Kyrie.  Both may or may not be back in time for the start of the post-season.  Yet the Celtics find themselves comfortably in the 2-seed.  Looking back on their season, they could’ve rolled over and nobody would have blamed them.  Losing Hayward in the very first game was a gut punch for sure, but trying to integrate all these new pieces in such a short period of time?

A recipe for disaster.

But instead of lying down and accepting their fate, the Celtics rallied behind head coach Brad Stevens and have surprised the league with their gritty on-court play and determination.  Next man up is the mantra and damn near every single player regardless of experience is coming up big.  How Coach Stevens maximizes a player’s potential is remarkable.  In the absence of Kyrie, Coach Stevens has entrusted Rozier to lead the Celtics and he has done so admirably.  Scary Terry Rozier is playing like a quality starting guard.  Forwards Jayson Tatum, Marcus Morris, and Jaylen Brown have been tasked as the offensive focal points in the most recent stretch of games and have found great success.  Al Horford isn’t flashy, never has been, but without his leadership on the court, the Celtics ship may have sank early in the season.  Brad Stevens epitomizes great coaching, he understands the value of all of his players and works meticulously to put his team in the best position to win games. 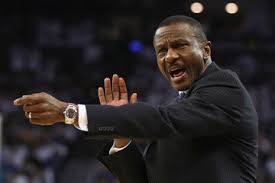 Dwane Casey and the Toronto Raptors don’t get enough credit for the type they are season they are having.   First Eastern Conference team to 50 wins. Check.  Third highest Net rating in the NBA.  Check.  One of the most efficient second units, if not the most efficient.  Check.  They are one of the best teams in the NBA and a lot of that credit lies solely on Duane Casey.  Beating teams with your first unit is one thing, but absolutely crushing them with your second unit is another.  That type of balance is only possible if the head coach trusts their players.  Dwane Casey does, he expects them to fight every game and they have responded with blowout wins throughout the season.

So why the lack of fanfare?

This is the most determined Raptors squad in recent memory, yet they are still met with skepticism.  For good reason, the past few seasons have shown that the Raptors can win in the regular season.  When the post-season comes rolling around however, they tend to wilt.  But this squad looks and feels different.  Dwane Casey has this team in synch and they play with a confidence and swagger not seen in years past.  Demar Derozan has elevated his game (he shoots more threes instead of long twos. who would’ve guessed?), Kyle Lowry is still great, Serge Ibaka looks comfortable and I would be remiss if I didn’t mention how great back-up guard Fred Van Fleet has been.  Hopefully, he gets the chance to run his own squad someday as he is the heart and soul of that second unit.  Barring any sort of injury, this squad may find themselves in the Finals this year if they can keep this torrid pace.  Toronto is dangerous and Dwane Casey is the architect.

Both of these respective Coaches have done masterful jobs in regards to running their squads.   Even though I am a self-professed Celtics fan and my vote for Coach of the Year would go to Brad Stevens due to his work with the walking wounded.  It is understandable as to why Dwane Case should be one of the favorites;  Toronto is the best team in the East and deserves recognition, they are one of the most lethal teams in the NBA and this could be the year they break through to the Finals.  Regadless of who wins, in my opinion these two coaches are the most deserving.